In the last few weeks, two of Leyden's Tech Support Intern (TSI) students have reviewed the Lenovo N22 and HP 11 EE Chromebooks.  Below are their reviews of the second generation Dell 11 Chromebook. 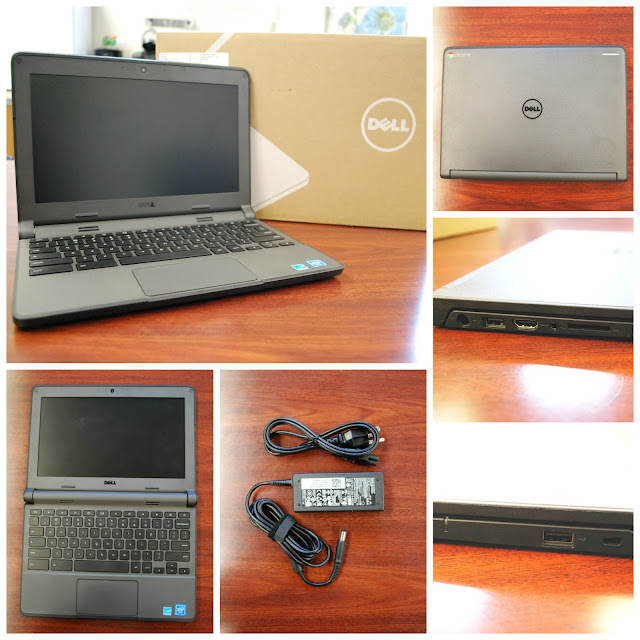 The first and probably the most beneficial feature of this Chromebook is that the edges are co-molded with actual rubber (unlike the HP Chromebook 11 G4 EE, which was co-molded with plastic).  This is a huge plus for students in the event they drop the Chromebook.  According to Dell, the device is “specifically built to withstand the abuses inherent to an education environment.  It’s purpose-built design means that this notebook should survive drops, water spills, dirt and dust and most things that the harsh academic environment throws at it.”  In addition to the co-molding, the device has rubber feet.  This allows the Chromebook to grip to desk and table surfaces and helps prevent accidental slippage.

An additional benefit to the Dell Chromebook 11 2nd Generation is the anti-glare display. This means that when you are in a bright environment, the display will not reflect the light around you thus making it easier to see what is on your screen.  I was extremely pleased with this feature.  Most classrooms are really bright and with other devices, I was forced to adjust my screen to an uncomfortable position in order to see it.  I did not have to do this with the Dell Chromebook 11 2nd Gen.

Another neat feature that this Chromebook has to offer is that it has dual front facing speakers. In my experience, this placement of the speakers makes the audio sound clearer and easier to hear.  This is in contrast to the current Dell Chromebook we are using which has bottom facing speakers.

Even though the 2nd generation Chromebook 11 has numerous benefits, like all technologies, it does have two negatives that I would like to address.

The first negative is the Chromebook only has one U.S.B 2.0 port, allowing only one peripheral or external storage device to be connected.  This may cause a problem for some students who need to connect multiple devices to their Chromebook such as a wireless mouse, flash drive, or even their cell phone.

The second negative is that the keys on the keyboard are raised a little too much.  Although the keys feels nice and responsive, garbage, food crumbs and dust can easily get under them.  I can see this possibly becoming an issue especially if enough debris gets caught under the keys preventing them from working properly.

To conclude, the 2nd generation Dell Chromebook 11 is almost a flawless device. For $250, you get amazing specs and a well protected and designed exterior.  In addition, the Chromebook is manufactured by Dell.  This is a huge advantage for Leyden as we already have a partnership with Dell.  We already have two years experience repairing Dell Chromebooks, following R.M.A(Return Merchandise Approval) procedures, working with Dell’s warranty, etc.  I think that Leyden High Schools should keep this Chromebook very close to mind when choosing the next student Chromebook.

The Dell Chromebook 11 has many appealing qualities that make it the best fit for the Leyden students. Dell’s design of the Chromebook 11 looks like a revamped version of their original Dell Chromebook. Dell’s new Chromebook is also wider than their last Chromebook, and the difference is big enough that it will no longer fit in the old blue Leyden cases and will now only fit in the newer black cases.

The best quality of the new Dell Chromebook is the hard new shell. The shell for the Chromebook offers much more protection than the Lenovo, HP, and even the previous Chromebooks we’ve had in the past. This Chromebook, in the time I have had it, has not received one scratch or any sort of damage. This Chromebook can take a beating and could probably even be dropped and receive no damage whatsoever. This characteristic of the Chromebook will be very beneficial to students because they constantly drop and break their them, causing them to be charged massive fines and take loaners.

Another great quality that not only this Dell, but all the Chromebooks had was the fact that the screens can bend all the way back. Now students can put the screens back to their preference. They also won’t break the screens and cause them to become unhinged from the system. Hinge problems are one of the most prominent reasons for sending Chromebooks back to Dell. The return rate on these Chromebooks can last from weeks to months, causing students to get long-time loaners and lowering the loaner count we have for all the other students. I’m glad these hinge problems will be minimized.

One of the unique characteristics of the Dell Chromebook 11 is the little LED light in the front of the Chromebook. By using an app on your Chromebook, you can change the color of the light to either red, blue, or yellow. There are a variety of uses for this little light. For example, when the teacher wants to know when everyone in the class is done with a particular in class assignment, they can ask their students to change the color on their Chromebook to red. A teacher could also divide the classroom into groups of 3 and have each group be a separate color.

The Dell Chromebook 11 is the best Chromebook so far for the Leyden students and I think that, in the end, it will be the best choice. The fact that it is so durable is one of the biggest reasons to choose it because in the long-run it’ll save Leyden a lot of money. The LED light in the front adds a new layer of innovation that teachers and students alike will benefit from. Even the battery life and speeds from it are not that far off from what we currently have.  Although the touchpad and keyboard are average, I think the pros of this Chromebook really make it stand out from the rest of others.
Posted by Unknown at 10:15 AM