Last week I posted two Leyden Tech Support Intern (TSI) students' reviews of the Lenovo N22 Chromebook.  For the past week, they have been using the HP 11 EE Chromebook and here are their reviews of those devices. 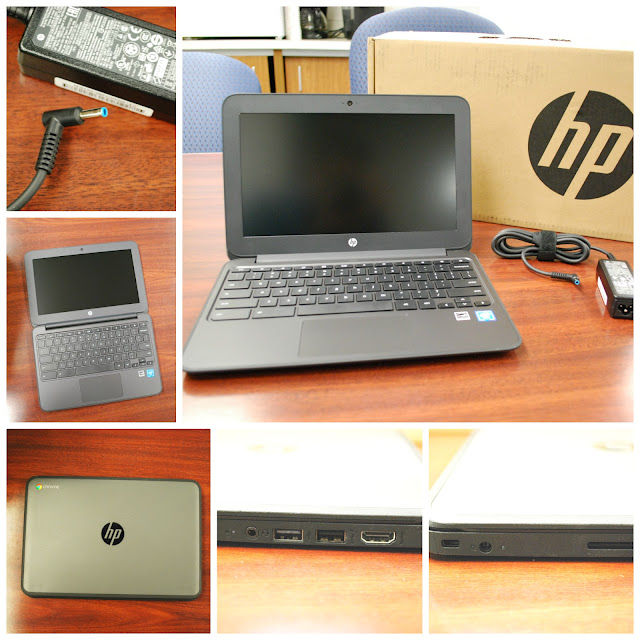 The most satisfying thing about the HP Chromebook is the keyboard. The keys were smoother to type with, and they allowed for faster typing than the Dell Chromebook. I even felt like I wanted to do work in school now with the keyboard that was, in general, much more comfortable to use. Essays became a breeze to type.

Another thing that I was glad was better in design was the touchpad. When I was using the touchpad for the first time, I was pleasantly surprised to find that it was very responsive. It moved where I wanted it to and it didn’t randomly flick away or not move at all. This was a problem that I, as well as others, have had with the Samsung and Dell and I’m glad that one of the new Chromebooks have finally taken this into consideration and fixing the problem for students.

The speed of the HP Chromebook was more closely related to that of the Dell. I was glad I didn’t have to put up with Lenovo-like speeds. I didn’t have to wait that long for the Chromebook to power on and connecting to certain websites were not that slow either, maybe even a little bit faster.

Now the cons of the HP Chromebook, the biggest being the battery life. Unlike the Lenovo, which would last days, the HP barely lasted 2 days in my hands. I had to constantly charge it, which was a nuisance. The small battery life will lead to more loaner Samsung Chromebooks to be lent out, if the HP was the one you choose. What students need is the bigger battery so that Leyden’s TSI would stop running out of Chromebooks to give to students when they have their uncharged.

A disappointing characteristic of the HP Chromebook was the number of USB ports. It only had 2 USB ports as opposed to 3, so there if you connect a mouse and a flash drive, you’re limited to just that. For those who want to connect any other peripheral devices will be forced to disconnect their mouse or flash drive.

From what I have seen thus far, the Lenovo and HP Chromebooks are polar opposites of each other. One has a better trackpad and keyboard, while the other has a better battery. One has a thicker design, while the other, a more slim and compact one. One is modeled after a Samsung Chromebook, the other, a Dell Chromebook. While the HP is a step up from the Lenovo, I feel like it still lacks certain qualities that are needed for it to be the “Leyden’s Next Top Chromebook”.

The HP Chromebook 11 G4 EE was made for educational purposes hence the EE in the name which stands for Education Edition. The HP 11 G4 EE has numerous upsides and very few downsides. The starting price for this Chromebook is $199 which is a very good price considering the specs: dual core Intel Celeron N2840 running at 2.16ghz; Intel HD Graphics; and 3.778 GB of R.A.M.  With these two internal components (dual core Intel Celeron N2840 running at 2.16ghz and 3.778 GB of R.A.M), the Chromebook operates at a high speed without any major problems.  While I did experience a few lagging issues here and there while multitasking, this did not impact my productivity and is something I expected based on my past Chromebook experience.  Overall, I was very happy with the performance of the device.

A major benefit of the device is the battery life.  HP claims that it lasts up to 9.5 hours on one charge.  I used this Chromebook for one full week.  During that week, and with normal school usage, the Chromebook lasted for 2.5 days without needing to recharge.

Another benefit that the HP Chromebook 11 G4 EE has to offer is that the keyboard is spill resistant.  According to HP, the “spill resistant keyboard keeps it safe from leaky lunchboxes”.  As a TSI student, I have helped many students who come into the classroom having spilled various liquids on their devices.  This spill resistance keyboard could be a huge benefit.  I do wonder, though, how easily liquids will go through ports and other vulnerable parts of the Chromebook.

Aesthetically, this Chromebook looks very nice.  The first thing I noticed were the edges of the device.  The exterior is co-molded with rubber along the edges.  According to HP, because of this, the Chromebook passed their 2.3 foot drop tests.  This is a pretty neat feature.  I also like how thin and light the Chromebook is. The HP G4 EE Chromebook is 20mm thin and weighs 2.7 pounds, which can be a very useful feature for a student because it will not take up too much space in their backpack or weight them down.  Additionally, the HP Chromebook 11 G4 EE has the U.S.B 2.0 port, the U.S.B 3.0 port, the headphone jack, and the HDMI port on the right side of the device.  The ports being on the right side of the device feel more natural for right handed individuals since they tend to hold items (such as a flash drive) with their right hand.  The charging port and the SD card slot are on the left side of the device.

Another cool feature of the device is that the screen can lay 180 degrees flat.  While this is pretty cool and reminds me of tablet devices, this feature can also be useful to students, especially when showing work to another student or teacher.

Now that I have named the numerous benefits that this Chromebook has to offer, let’s talk about a few downsides of the device.  The first downside is that the speakers are on the bottom of the Chromebook which makes the sound a little bit muffled and hard to hear.  The sound quality of the speakers are average.  While this placement does not lend itself to optimal performance, I do not think it will be too much of a problem considering students who need audio almost always use headphones.

The second downside that I noticed was that the Chromebook’s exterior consists of a slippery plastic which may cause some students to drop the device.  As mentioned above, the Chromebook passed their 2.3 foot drop tests; however, most drops occur from more than 2.3 feet.  Also, the Chromebook’s feet seem to be made of the same plastic of the rest of the Chromebook.  I used the Chromebook on a wooden desk, a glass desk, and a synthetic countertop.  In all three instances the Chromebook easily slid on the surface.  In addition, I noticed that smudges show up easily on the plastic.

Overall, when I was given the HP 11 G4 EE, I thought to myself “this Chromebook looks high end”.  After using it for a week I still have the same opinion. The device has great specs and a great battery life all for a good price.  I also appreciate that HP had education in mind when developing this Chromebook. I feel that this Chromebook could be a good option for Leyden High School and should be considered for next year.
Posted by Unknown at 9:05 AM