Narrate your presentations with Movenote

Have you ever reviewed the slides from a presentation and wished you could hear "the rest of the story" behind each slide?  Giving a good presentation is truly an art form and any good presenter knows that less is more when it comes to each slide.  This, however, does not translate well when the slides are published online.  Some of the key points get lost without the narration and the charisma of the presenter is not available to add the extra emotion.  One possible solution would be to narrate your presentations first before posting them.  I recently learned about Movenote which could help fill this void.  Movenote is a Web-based tool that allows the user to import a variety of media (slide decks, documents, images, and other files), organize the materials, and then run through the presentation while recording audio and video of the presenter.  Even better, for Google Apps users, it integrates with your Google Drive.  The finished products can be shared to your favorite social media site or blog, sent via a link in an email, embedded into a webpage, and even downloaded as an mp4 video file.

Teachers could certainly make use of this tool to record their presentations and post them for their students to play later as a review, as a substitute for the "live" version if they were absent, or as a first-time viewing in a flipped classroom model.  Another idea for use in education would be to have students substitute live, in-class presentations that take up valuable time (unless the goal is to work on public speaking/presenting) with Movenote presentations and then have each student review the presentations and provide feedback on their own time.  Teachers could easily create a Google spreadsheet and share it with their students to add their URL's so they are all located in one place.  This process is even easier if the teachers have access to a tool like Hapara's Teacher Dashboard to share out the spreadsheet with all of their students.  A gentle reminder to the students that the revision history of the spreadsheet will show who changed the document and when should prevent any accidental or intentional tampering with the info.

This tool appears to work on most platforms, including Chromebooks.  Here's where you can get it:

There are plenty of tutorials on the Movenote website for each platform.  Here is one specifically geared toward use on Chromebooks:

I'd love to hear about other uses for Movenote and other comparable tools.  Please comment below.

Posted by Unknown at 2:35 PM No comments:

Once again, I have asked the same two Leyden students to review another new Chromebook model.  This time it's the Acer C720P touchscreen.  This is the fourth new Chromebook they've used as their primary device for one week and then written up a review.  Here are their previous reviews:  HP 11, HP 14, and Acer C720.  Hopefully, by the end of February, we will have a plan in place to begin replacing our current fleet of Samsung Series 5 Chromebooks.  I hope you enjoy these reviews and stay tuned for a review of the new Dell Chromebook in a week or so.  We just got them in yesterday! 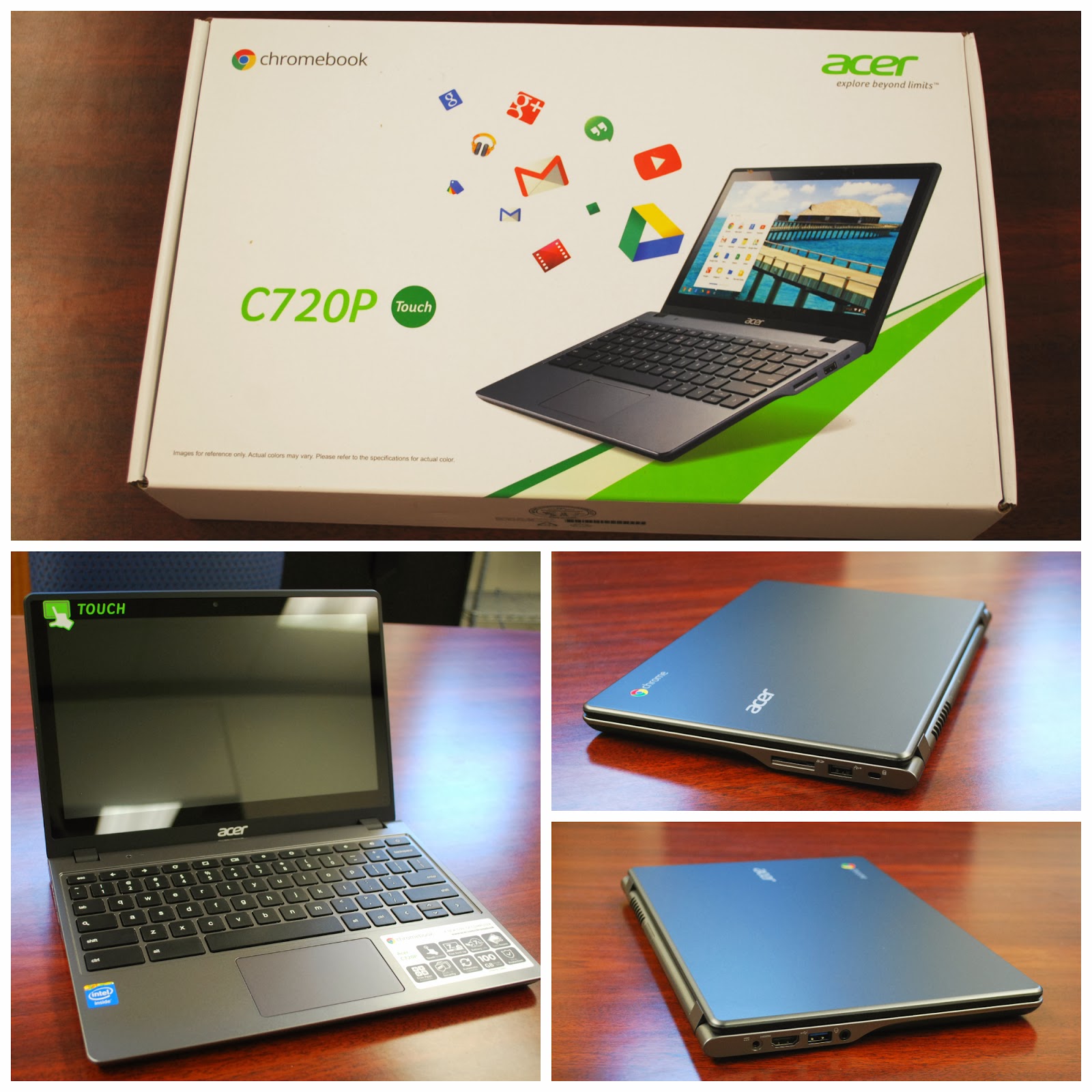 My name is Bryn and I am a Junior at East Leyden High School.  I am also a first year student in the Technical Support Internship course.  In total, I have been able to test 4 new Chromebook models in an educational setting.  The opportunity was granted by Mr. Jason Markey, East Leyden’s Principal, and Mr. Bryan Weinert, the Director of Technology.

This week I tested the Acer C720P Touchscreen Chromebook.  This Chromebook has all the same specs as the Acer C720 I previously tested (click here to read my review on the Acer C720).  The only difference is the addition of a touch display.

Since I addressed the loading time, keyboard/trackpad performance, screen, and ports of the Acer C720 in my previous post, I will use this post to address the boot time, touch display, audio capabilities and battery life of the Acer C720P.

According to Acer, the C720P has a 7 second boot up time.  I found this to be true.  The device was very quick to boot.  This 7 seconds is quicker than the Samsung Series 5 boot time of 10 seconds.  Although I mentioned web site loading time in my previous post of the Acer C720, I did want to emphasize that the loading time of this device compared to the Samsung is significant.  I found this particularly true when trying to access multimedia sites.

This is the first Chromebook I have tested that has a touch display.  It is a rather fun addition.  The touch display is precise to the touch and in most cases, I preferred using it over the trackpad.  For me, the best part of the touch screen is that I can drag the screen right or left to access previously loaded pages.  There were times, though, when the page would freeze when sliding left or right.  Overall, I believe I was able to work more quickly due to the touch display.  Due to this, I believe it could be very helpful in an educational setting.

While the Samsung’s volume is incredibly low in both strength and sound, the Acer C720P Chromebook bypasses the Samsung with ease.  In fact, many students commented on the volume of the music I played when using the speakers or my headphones.  I definitely approve of the sound quality and strength.

The biggest downfall of the Acer C720P is the battery life.  According to Acer, the battery life is “up to 7.5 hours”.  Unfortunately for me, my Chromebook never made it to the 7.5 hour mark.  The Chromebook died before getting to last period (approx 6 hours) on all days that I was using it.  The fact is that many students use the Chromebook for non-school related purposes (ex. using YouTube to listen to music) and have multiple pages open at all times during the day.  This is a serious blow to the device when it comes to using it in a 1:1 computing environment as it may require students to bring their charger to school and possibly charge during class.  On the bright side, the recharge time was very quick.

Overall, I believe the Acer C720P is a good Chromebook for personal use and the addition of the touch screen adds an element of fun.  However, I would not recommend it for use in schools due to its limited battery life.

For the fourth time, I received a new Chromebook model to try out and review.  This time it was an Acer C720P, essentially a C720 with a touchscreen.  The color, materials, weight, size, and overall appearance were the same as the C720.  They are both dark gray aluminum, weigh lightly, and operate impressively fast.  They both have the same ports (USB, HDMI, SD), vents, and general specs.

I already covered the C720 a little more specifically in a previous review.  The focus and highlight of this C720P Chromebook was its touchscreen.  It was a nice glossy 11” HD screen, which looked better than the screen on the C720.

As soon as I saw this Chromebook, I tried thinking of cool, productive applications or programs to use with a touchscreen.  It did not come with a stylus pen, unfortunately, so I had to use the touchscreen with my finger.  It was pretty accurate, but I had to get accustomed to precisely executing maneuvers in order to write and select on the screen.

I looked in the Chrome store for applications that could be useful, and I came across Sketchpad 3.3.  This application allows the user to draw on the screen.  The problem with it was that it had a very limited canvas.  It was also kind of glitchy when I drew using certain tools.  I tried using this app as scratch paper for classes like math, and it worked okay that way.

Another application I used was express.smarttech.com.  It is a very simplified version of SmartBoard Tools.  The user can add multiple pages, kind of like adding slides in a PowerPoint, and draw on each of them.  I used this once in AP Calculus, but it was difficult to write and take notes quickly.  I resorted to regular pen and paper the next day.

As I mentioned, the real highlight of this Chromebook compared to others is its touchscreen.  I would anticipate problems with this feature because it would give our Tech Support class a new problem to deal with.  I do not know how hard the process of troubleshooting and replacing a touchscreen is, but I cannot find any settings that could provide a starting point within the OS.  I also tried a few stylus pens on the screen, but they did not work.  The idea of reducing paper consumption would work great with a device like the Acer C720P, but it needs to be at least as easy as using pen/pencil and paper, and from my experience, it was not.

I would choose this model over the plain Acer C720, but I would need to see better functionality and accompaniment for a touchscreen on a Chromebook.