Student Reviews of the Toshiba Chromebook

For the sixth and probably last time this school year, I have asked the same two Leyden Tech Support Intern students to use another new Chromebook as their primary device for a little over a week and then write up their reviews.  This time it's the Toshiba Chromebook.  If you haven't already read their previous reviews you can check them out here:

Now, on to the Toshiba reviews... 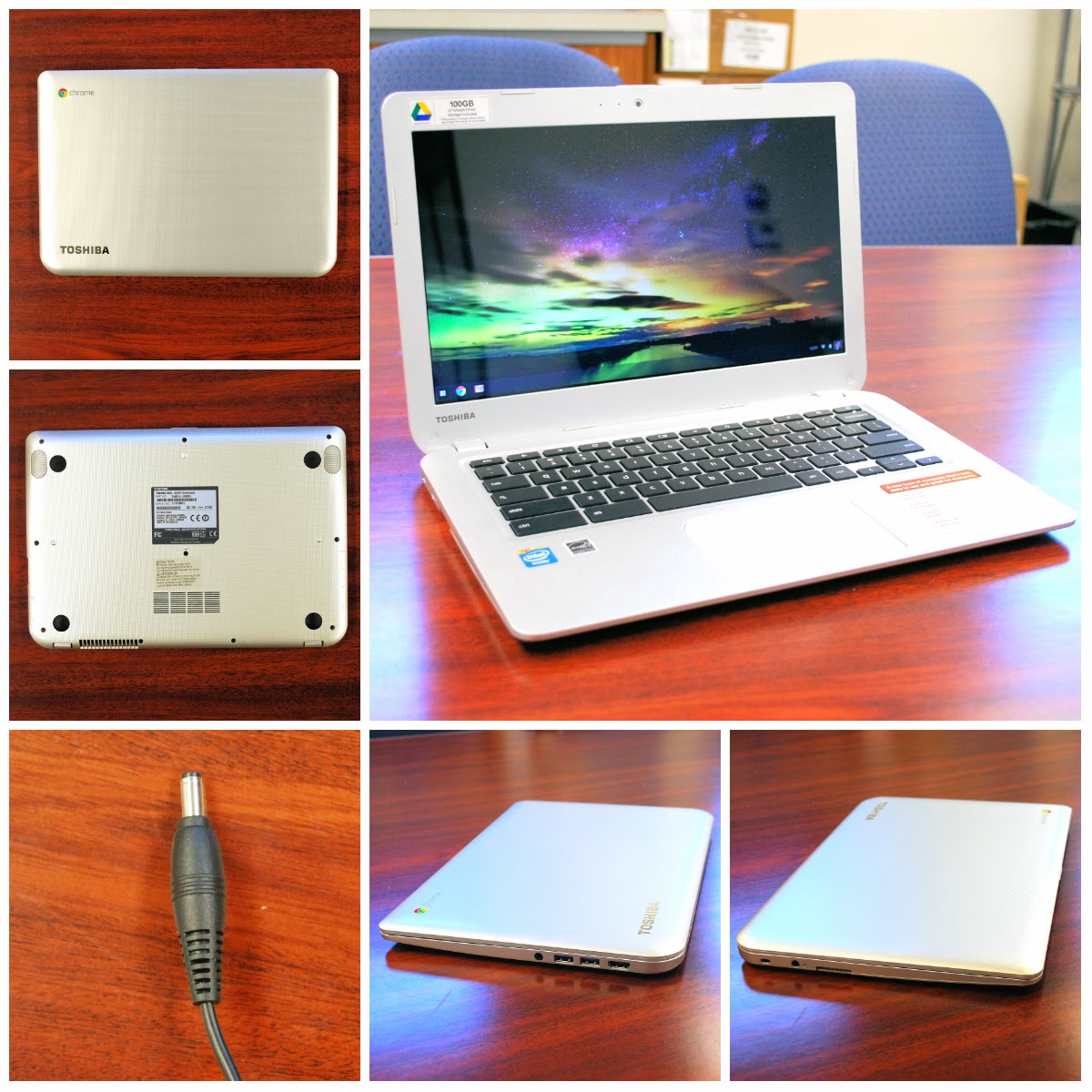 Hello.  I am Bryn, a junior at East Leyden high school and a first year Technical Support Intern.  Over the last few months I have tested multiple Chromebooks including the HP 11, HP 14, Acer C720, Acer C720p and Dell 11.  This review will be dedicated to the Toshiba Chromebook and will highlight the Toshiba’s speed, battery life, and aesthetics.

To start things off I will be discussing the speed of the Toshiba Chromebook.  When it comes to using a Chromebook in an educational setting, this is one of the most important factors.  On the Toshiba website, they state that the Chromebook “start(s) up in seconds” and has a “reliable Intel® Celeron® processor”.  While they do not provide a specific boot up time, I found that the Chromebook booted up very fast, allowing me to get to work quickly.  I was also easily able to multi-task and navigate through multiple tabs at a rapid rate.

Toshiba claims that this Chromebook has a 9 hour battery life.  As a student who uses the Chromebook to complete assignments using Google Drive, listen to music and watch YouTube videos, I found this to be true.  In fact, the Chromebook lasted a full two days without needing to be charged.  When it did need to be charged, it took approximately 90 minutes to reach 100%.

While many other reviews on the Toshiba Chromebook mention its lack of visual/design appeal, I actually found the Chromebook to be very appealing.  The silver color is enhanced with a slight dot design on the top cover that makes the Chromebook look very sleek and sort of futuristic.  The Chromebook is significantly lighter than other models (3.3lbs) and the screen is large at 13.3 inches.  In other Toshiba Chromebook reviews, it was mentioned that the resolution of the screen (1366 x 768) leaves a little to be desired; however, it was not an issue for me especially since the device is being used for educational purposes.  The overall size of the Chromebook is larger than other models (aside from the HP 14) and makes the device feel like a more traditional laptop computer.  I did not mind that is was larger because it was so light in weight.  The Chromebook has two 3.0 USB ports, HDMI output port, headphone jack, built-in webcam, security lock and SD card slot.

One interesting thing that I noticed about the Toshiba Chromebook was the warning that was displayed in both English and Spanish on the underside of the device: “Caution: PC base can become hot!  Avoid prolonged contact to prevent heat injury to skin.”  Having never seen a warning on any other Chromebook, I was immediately curious and extra aware of the heat while using the Toshiba device.  While I did not experience any significant “hot” heat from the Chromebook, it did feel warm to the touch at times.  I did not find this to be an issue while using the device and did not notice any negative effects on the performance of the Chromebook.

Overall, I think this Chromebook could be a good choice for a school’s 1:1 environment.  One of the best selling points is it’s long battery life.  Of all the Chromebooks tested, the Dell Chromebook is still my favorite for use in educational settings.

The Toshiba 13 Chromebook is the latest, and probably last, new Chromebook model I tested in school. It mostly resembled the HP 14 that I tried some months ago, and the HP 14 looked like a MacBook; therefore, the Toshiba looks like a MacBook. I even had some students and teachers ask me if it was MacBook. As always, they asked me if those would be the ones they would get next year.

I was surprised by the weight of the Toshiba Chromebook. The last Chromebook I tried was the Dell 11, and they felt about the same in weight even though the Toshiba is larger.

Compared to the color of the flamboyant, sparkly pink HP 14, this Toshiba was much more neutral. It seems that metallic gray is the only color choice for this Chromebook, but it would be a good choice for an educational setting.

The startup and loading speed was no surprise. It takes no more than seven seconds to boot. Websites like YouTube only take about five seconds to load, and simpler webpages like our district homepage appear in no time. The speed was much like the HP 14.

The battery life is what stood out to me the most. One day I set the brightness to the max and forgot about it. I also forgot to charge the Chromebook. Surprisingly, the Chromebook lasted two days on full brightness and volume without needing a charge.

The webcam was actually quite decent compared to those in other Chromebooks. Movement was not too blurry, and video looked sharp. I do not know if these qualities remain when streaming via Hangouts or other video call services because they are blocked.

Like almost all other Chromebooks, the Toshiba has two USB 3.0 ports, HDMI, SD slot, headphone jack, charging port, and a lock port. There is an orange/green light that shows when the Chromebook is charging/done charging.

One problem that occurred while using the Toshiba Chromebook was that it spontaneously restarted. I had not pressed any buttons, and there were no pending updates. I think the more likely culprit would be the Chrome OS software -- or at least the version that was installed when it happened.

Another thing to be aware of is the durability and rigidity of the device. As I inspected the Chromebook while writing this review, I noticed some scratches and dents on the side that usually touches the ground in my backpack. As the tester of new Chromebooks, I have been and am very careful with the devices, so in the hands of other students, the wear and damage may be worse. The size of it would definitely require different cases than the ones we have already.

The Toshiba Chromebook most closely resembles the HP 14. The size of the Toshiba screen is only about an inch smaller, but the speed is about the same. The only thing that really set it apart from the other choices was the battery life, but even so, the HP 14 had a fairly large battery pack. In fact, in my experience all Chromebooks have lasted at least until the end of the school day. This Chromebook did not offer anything special that would make it superior to the HP 14 or the Dell 11 that I had previously elected as the best choice. Nevertheless, it was a better device than the good ol’ Samsung Series 5.
Posted by Unknown at 8:42 AM No comments: