Student Reviews of the Dell 11 Chromebook

For the fifth time now, I have asked the same two Leyden Tech Support Intern students to use a new Chromebook as their primary device for about a week and then write up their reviews.  This time it's the Dell 11 Chromebook.  Here are their previews reviews:

It's looking like the possibility of upgrading the Chromebooks for all of our students next year just may happen.  My team and I are currently analyzing all of the available devices and will certainly be using the reviews of our students to help make our decision. 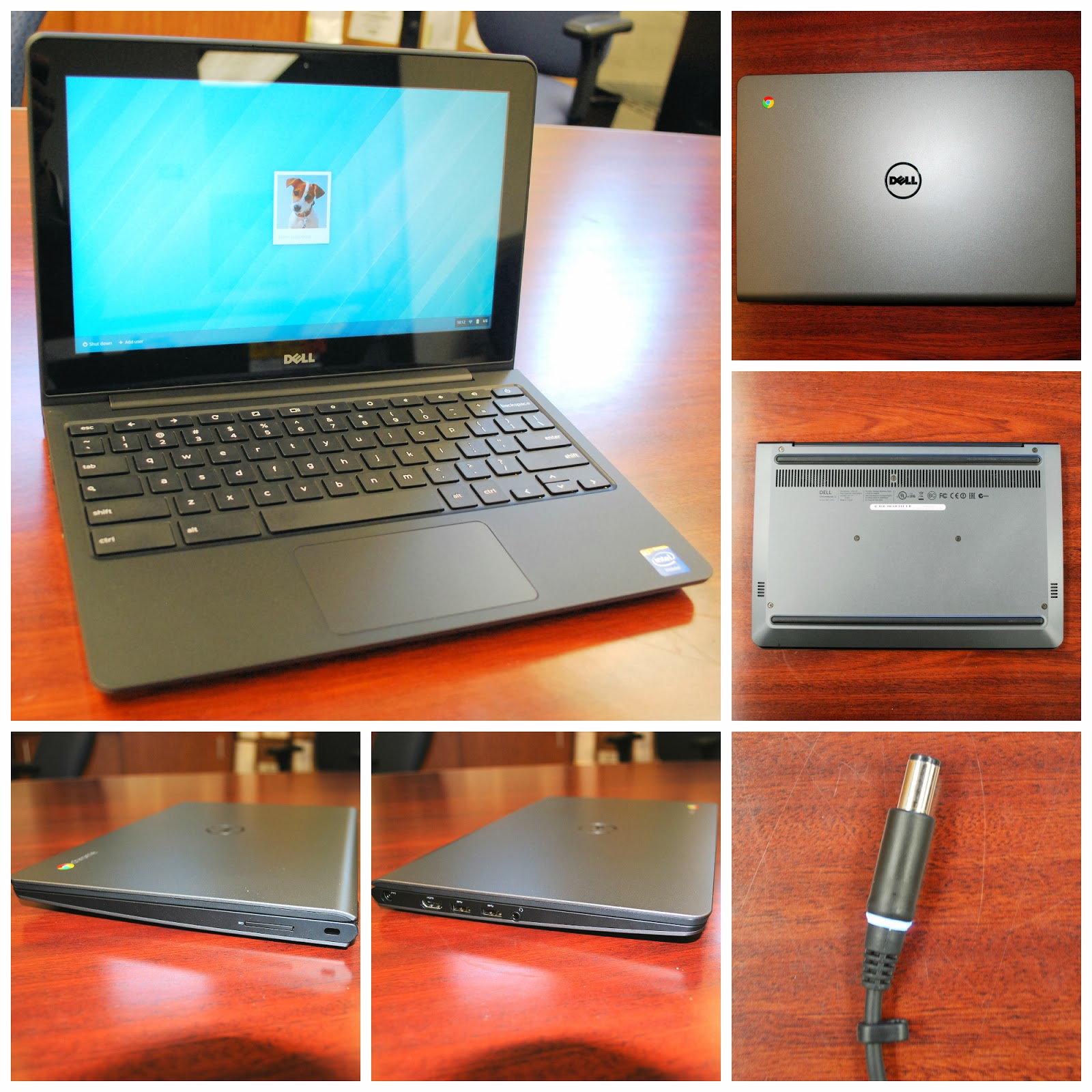 My name is Bryn and I am a Junior at East Leyden High School.  I am also a first year student in the Technical Support Internship course.  During the year, I was given the opportunity to test new model Chromebooks  So far I have tested five with the Dell Chromebook 11 being the fifth.

All the Chromebooks I have tested have performed better than the Samsung Chromebook (our current Series 5 model) and this Chromebook is no exception.  In this blog post, I will specifically be discussing the Dell Chromebook’s speed, battery life, accessories & aesthetics.

I was unable to find any information from Dell on the Chromebook’s boot up time; however, in my experience it took approximately 8 seconds to boot up after complete shutdown and 4 seconds to boot up from sleep mode.  With a processor speed of 1.4 GHz, I was able to load pages and work in Google Docs at a quicker speed than my fellow classmates.

According to Dell, the Chromebook has a 10 hour battery life.  On my first day of using the device, I made an attempt to drain the battery by using it as much as possible at school and at home in the evening.  The Chromebook lasted for an entire day of use and then some.  The device has a considerably good battery life and a quick recharge time.  While charging, a white LED light on the bottom right of the device was illuminated.  The light turned off to indicate a full charge.  I did notice that the device did get really warm at times. This may be due to the location of the air vents.

The accessories on the Chromebook are nice. They include a charging port similar to a Dell laptop port, a HDMI port, two 3.0 USB ports, and a headphone jack.  Like all other Chromebooks, the device also has a webcam.  The Chromebook itself is a little larger than the Samsung Series 5 but not as large as the HP 14.  Aesthetically, there is nothing exciting about the Dell Chromebook.  In truth, I found it rather plain and bare-looking; however, it is nicer looking than both previously tested Acer models.  It has smoother edges and a more sleek design.

The Dell Chromebook definitely seems like a more reliable device than the Samsung Chromebook.  I don’t like this particular Chromebook as much as the HP14 Chromebook (my favorite thus far), but it is more convenient due to its smaller size.  I think this device would be a nice option should Leyden decide to change devices in future years.

This week, I tried out the Dell Chromebook 11.  It is a simple, elegant, yet durable-looking device.  It’s black with a glossy Dell insignia on the front cover and has a glossy screen.  The keyboard and area around the keyboard are made of a rubbery material.  The trackpad and keyboard are responsive and clicky. The Dell gave me a good first impression.  Even its charger set itself apart from the others, with a neat light at the tip of the cable.

HDMI, USB 2.0, USB 3.0, SD, and headphone ports seem to be the standard on new Chromebook models, including the Dell.  Since a lot of classroom equipment lacks HDMI input, an HDMI-VGA adapter may be needed to connect the Chromebook to the projector, monitor, etc.

The Chromebook starts up very quickly in around five seconds.  In terms of speed of startup and loading pages, the Dell may be one of the fastest I’ve tried.  It is on par with the speed of the Acer C720/P.  It lets me start searching almost right after booting up.

I had a few problems when using the Dell.  One time, it seemed to have frozen at the login screen.  There was no backlight, and I could barely see the picture and password field.  I tried pressing buttons and clicking, but it did not wake up.  I also tried restarting it, but pressing the power button did not work either.  I brought it to the attention of Mr. Weinert, and he managed to restart it by pressing and holding the power button for a while.

The second problem also involved the Chromebook freezing.  It happened at home while I was doing homework and listening to music.  The Chromebook just stopped responding and I could not click on anything, though I could move the mouse.  Restarting it worked, but because the administrator settings (at Leyden) force the enrolled devices to load certain tabs on startup, the tabs I was working on went away.

The sleeves/jackets that we have now (for the Samsung Series 5) do not fit the Dell Chromebook very well.  It is possible but difficult to put the Chromebook in, and it requires stretching the jacket.  Electing this device to refresh the 1:1 system may also require new cases.

The Dell Chromebook 11 was a great device in my experience. Albeit it had some issues, they were not significant enough to make me completely say no to it as a choice.  In fact, all things considered, I may have to say that the Dell Chromebook seems like the best contender for an educational setting.  It feels more solid than any other Chromebook; it is faster than most other Chromebooks; and it is as responsive and smooth with the same capabilities as the other Chromebooks.

Posted by Unknown at 4:32 PM No comments:

Email ThisBlogThis!Share to TwitterShare to FacebookShare to Pinterest
Labels: 1:1, Chromebook

Here is the schedule of ICE 2014 presentations by Leyden teachers and administrators: 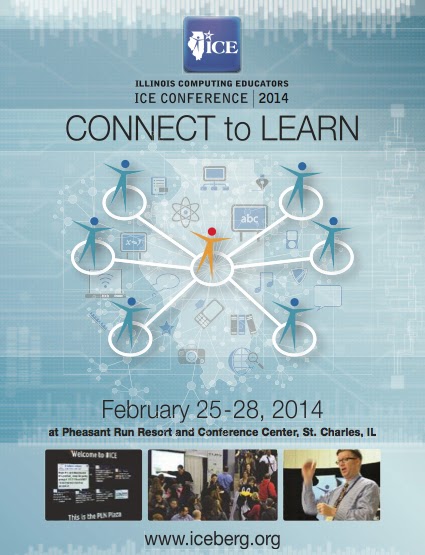 BREAKOUTS SESSIONS
Posted by Unknown at 3:11 PM No comments:

Last week I blogged about EDpuzzle (Supercharge and Personalize Videos for Your Students with EDpuzzle).  Since my original post, I have learned about two new fantastic updates:

I really think this could be a tremendous tool to be used with students, especially in a 1:1 teaching and learning environment and to expand learning opportunities beyond the classroom walls.  Anyone using it yet?  What do you think?
Posted by Unknown at 1:35 PM No comments:

Supercharge and Personalize Videos for Your Students with EDpuzzle

By now, most educators have found that video can be a powerful tool to integrate into their lessons.  Some are creating their own.  Some are just finding and sharing clips with their students.  Some are even going as far as flipping their classrooms.  Whatever the use, video adds another engaging layer to good teaching and can expand learning opportunities to outside of the classroom that students can pause, rewind, and replay.  Yesterday, I learned about an incredible new tool from Kelly Tenkely's outstanding iLearn Technology blog called EDpuzzle that allows teachers to first supercharge and personalize the videos they want to use before sharing them with their students.  Some of the key features of  EDpuzzle include the following:

If you use video with your students, this is definitely one tool to look into!  If you're not creating your own videos yet, this tool might just help jump-start your recording and producing career.

I recorded a screencast of the demo from their website.  Check it out:

I just learned about another great feature that was just added to EDpuzzle earlier this week.