Over the last month, two of Leyden's Tech Support Intern (TSI) students have reviewed the Lenovo N22, HP 11 EE, and generation 2 Dell 11 Chromebooks.  Below are their reviews of the Asus C202 Chromebooks, the last devices they were asked to review. 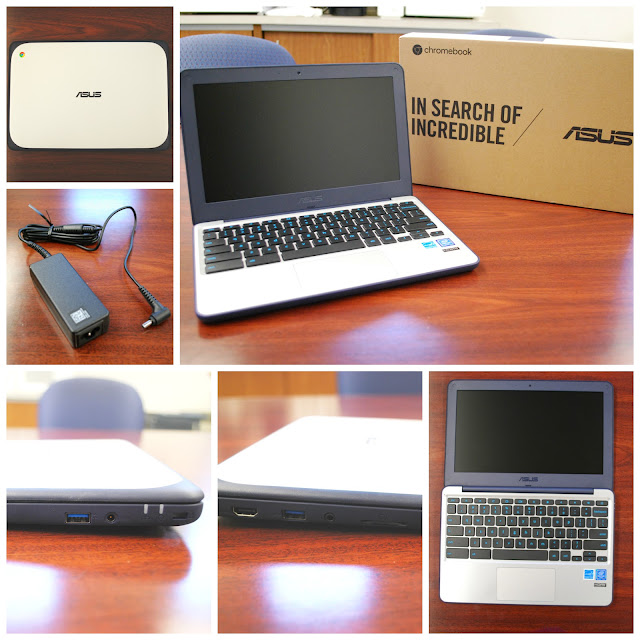 When I first saw the Asus C202 I was very impressed with how it looked.  It reminded me of a gaming laptop.  I also couldn’t believe that I got to test this Chromebook since it was showcased at C.E.S (Consumer Electronic Show) 2016.

The Asus C202 contains pleasing specs. This Chromebook has the Intel Celeron N3060 Processor with two cores which run at 1.60 GHz (note that this device contains a different processor than all of the other Chromebooks I have tested) and 3.8GB of R.A.M. These specs allow for the Chromebook to be used for student tasks such as writing essays and manipulating Google spreadsheets.
This Chromebook has a great number of benefits, one of them being that it has a reinforced chassis and a rubber bumper with reinforced corners.  In addition, it has a scratch resistant exterior finish.  Asus claims this Chromebook was designed from the ground up for educational use and that it should withstand bumps, spills, and bruises that students may accidentally cause.

I really liked the keyboard on this device.  First, according to Asus, the keyboard is also spill resistant.  In addition, the letters, numbers, and other symbols on the keyboard are light blue.  For  me, this made the keys easy to locate in both dark and bright environments.

A different feature that this Chromebook has to offer is that the screen (like the Dell Chromebook 11 2nd generation) is anti-glare and is 11.6 inches. This is a useful feature because the screen is easy on the eyes.

I also really liked the modular design of the Chromebook.  The keys on the keyboard, power socket, and the battery are modular.  Asus claims that full dismantling of the device is possible in a few easy steps using only simple tools. This would be a huge benefit for TSI students when it comes to repairing the devices. This could also be a benefit for Leyden students as it may be less expensive the repair the devices.  For example, rather than replacing an entire keyboard when a few keys are damaged, we could easily just replace the keys.

Finally, the footprint of the device is smaller than other Chromebooks I have tested.  This can either be positive in that the device consumes less space in a backpack or on a desktop or negative in that it can sometimes be harder to work on a smaller device.

As you can see, the Asus C202 Chromebook has many benefits, but it does have its downsides.

The first downside that I noticed is that this Chromebook only has one U.S.B 2.0 port. This may be a downside to some students because as I have mentioned before, they like to connect multiple things like their phone charger and an external mouse.

The second downside is that the Google Chrome browser starts to lag when only having six tabs open. This may be an issue for some students because they may like to multi-task and have multiple homework assignments open.

Another downside is the battery life.  Asus claims that this device only lasts about 8.5 hours, which is less than the other devices I tested.

The final downside that I noticed is that the bottom and top covers are white.  After using the device for about a week, the white covers were noticeably dirty.  In addition, I had black “skid” marks on the bottom of the device.   A quick clean did resolve the issue.

Overall, the Asus C202 Chromebook has a nice design, decent specifications, and a nice rugged exterior which is great for student use. This device has multiple benefits and few major downsides which consumers look for in any electronic device. I think that this Chromebook should be kept in mind when Leyden High School picks the next Chromebook, although I still believe that the Dell Chromebook 2nd Generation is the winner.

The Asus Chromebook is the greatest “looking” Chromebook I’ve had the pleasure of reviewing. It is mostly grey, with a navy blue rubber borders. It has a bumpy texture to it, the first of the Chromebooks. Inside, instead of keyboard consisting of black keys with white letters, it has blue letters. The screen, also, like the previous Chromebooks I’ve tested, lean all the way back. Aesthetically, it is the most gorgeous Chromebook I’ve ever used, and you can tell that Asus didn’t base their design of their Chromebook on any of the previous generations of Chromebooks.

The Asus Chromebook is the smallest Chromebook of the 4 Chromebooks I’ve used. It fits easily in the black Leyden case and could also easily fit in the tighter original blue case Leyden had given students. In terms of weight, it is also pretty light. The size and weight of the Asus make it easy to carry, especially for students who do not like to use their case when walking around Leyden with it.

The Asus’s Chromebook has a very satisfying to use mechanical keyboard. There is something that just feels right when you tap on a key and it makes a great clicking noise. There’s something rhythmic about it that makes doing classwork more bearable. The touchpad and mouse are also very smooth to use. It moves where I tell it to and it does not flick randomly and in general is very responsive.

Durability wise, it is tough to say with the Asus. The sides of the Asus are rubberized, so if it falls on its side, the rubber will absorb the impact. Chromebooks, from what I’ve seen in TSI, get damaged on their side a lot, and cracks their edges. Rubberized sides would minimize these Chromebooks problems by a lot. It is the only Chromebook of the 4 I’ve tested to have this quality. Besides the rubber sides, however, I don’t think the Asus is all that durable. The top of the Asus is just plastic, and a weak one at that. I can easily push it in with minimal force. If the Asus Chromebook were to land with the all the force on the plastic, I don’t think the Chromebook would survive.

Small, extra bits and pieces I want to go over are the speakers and USB ports. In terms of the speakers, it passed the Kung Fu Panda test wonderfully (if you’re confused, please look towards by review of the HP Chromebook). The speakers are the loudest and clearest sounding out of all the Chromebooks. The sound is not muffled and hard to hear like the others. Another one of the good qualities of the Asus Chromebook is the fact that both of its USB ports are USB 3.0s, which allows for faster data transfer speeds than the older USB 2.0.

The Asus Chromebook has an unbeaten physical design, a small form factor, and a satisfying to use keyboard and touchpad. It’s durability is so-so, better than what we have now, but there is still room for improvement. The battery life isn’t so great and I don’t think it’ll last long for students. The speakers and USB ports are an excellent touch though. However, I believe that the Asus Chromebook just isn’t the right fit for Leyden, because durability is a very important factor and Leyden should go with the Chromebook that excels the most in this quality.
Posted by Unknown at 12:35 PM